Returning to London after 19 months

I recently returned to London, after 19 months of living in New Zealand. I had been counting down for many months beforehand.

Flying from Seoul to London, I felt excited, but in a sense a little sad, as it felt like all my travelling adventures were coming to an end, even though I knew I would be returning to NZ and had other travel plans in the pipeline. 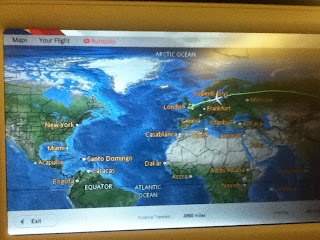 As we entered UK airspace, I got quite excited seeing place names that were once very common. It didn’t feel real being on that side of the country, but I was getting mentally and physically prepared to jump on my sister. I last saw her in January and it was my plan to be in London for two days before returning to Northern Ireland. 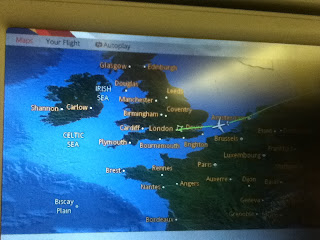 Landing in London, although quite tired, it was nice to see familiar signs (airports that I’ve grown up going to) 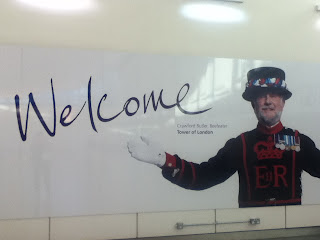 Welcome to London (after 586 days this was nice to see) 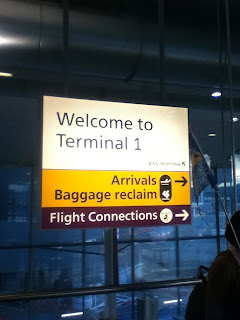 The first thing I revelled in was the accents. After spending 4 days in Korea, where the majority of people spoke little or no English .. it just felt good, and I knew I was home (sometimes I do consider England to be home, as I’ve spent the majority of my adult life there .. 6.5 years!)

Waiting on my bags seemed like waiting for paint to dry. It was a really full flight, but I always get nervous at baggage reclaim, as I’ve had bags go missing before. After 30 minutes, they arrived. I had time to get changed and text my sister to say my flight was late (one hour delay), but I’d see her at arrivals.

One good thing about flying back to the UK was the fact that I didn’t need to queue too much at passport control, it was just in and out in 10 minutes.

Walking through to arrivals and seeing lots of people with signs was a bit overwhelming. I stood for a few minutes looking around, and couldn’t spot my sister. I then looked over to my left and saw someone dressed strangely, but initially ignored this. Then I heard “ah hello there .. have you just returned from middle earth?!

It was my sister and her friend dressed up like characters from The Lord of The Rings. My first comment before giving her a hug was “what the he’ll are you wearing?!!” 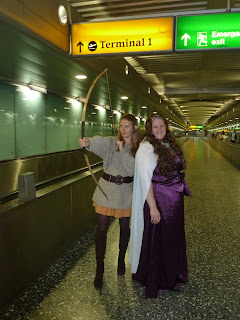 My sister and her friend (they got lots of attention from fellow Travellers and those waiting for people and had a few requests for photos). They travelled all, the way home in the tube like this.

Walking down to the Underground station were I was 19 months ago, topping up my oyster card and hopping on to the next train seemed like second nature! Like I had never left, or that I would never leave again. Apart from new signs, adverts, free WiFi on the tube and some new underground stations (thanks to the Olympics), it didn’t feel like it had changed much.

I arrived up to my sisters friends apartment (where she was house sitting for one week), felt so good, just to dump my bags down, wash my face and sit on a comfy sofa.
My sister asked if I wanted to get takeaway, but I had no idea what time it was and what kind of food I felt like. We ended up going to the Tesco Express on the corner, which I was sadly excited to see.

I went to the cash machine and automatically took out my Bank of New Zealand cash card. Seeing £10 notes again for the first time was a novelty. 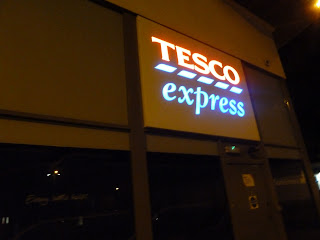 the local Tesco (yes, this is sad I know!)
Walking around Tesco, I was again revelling in the novelty that was familiar things, such as cereals I used to eat so much, chocolate bars, crisps (potato chips), and it was all so cheap!! 99p ($2 NZD) for 2L of milk. Though I did keep looking at things and thinking in dollars rather than pounds. For example I’d see something for £3 and be thinking $3, rather than $6. 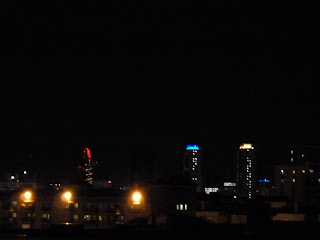 East London from the apartment we were staying in. The red light is part of Olympic Park
We returned to the apartment, ate our snacks, briefly caught up and went to bed. It was 22 degrees at night, which was slightly cooler than South Korea, but still rather hot to sleep in. I did sleep a good 5 hours but kept waking up intermittently. I finally arose at 9am, had breakfast, sorted my laundry and made my sister breakfast in be
Take that jet lag!
At this stage in my trip, New Zealand felt like a dream, as if it never happened. Though looking through photos on my iPod, I knew it wasn’t.
New Zealand, over the past 19 months has been amazing, but sometimes it is nice to come back to the familiarity of home and family. Looking out at the activity from the balcony on the ground, and seeing normal things such as a Royal Mail van driving, London buses and hearing a London accent.
It made me wonder whether I could settle in London or indeed the UK again, but I know I have more travelling to do before that happens. At the back of my mind I had to keep telling myself that I was on holiday, it was summer and if I moved back, it wouldn’t feel like a holiday.
It was good to be back, but I know a lot of my trip would include a massive period of reflection.
Please follow and like here

Self isolation with a baby
2 months ago

Planning a vacation to Orlando? Here is what you should know
2 months ago

Planning a Trip to Southeast Asia? Here’s What You Need to Know
3 months ago
Instagram has returned invalid data.
By continuing to browse the site you are agreeing to our use of cookies.
error: This content is my work and is protected