At one stage or another, most travellers can say that they’ve been on one or two overnight trains (or perhaps many more). I think I have slept on a few on short train journeys, but have never done the distance on a big overnight train.

The Trans-Siberian Express train, as well as other train journeys through Asia are on my list one day.

Last night, I had my first experience of sleeping on a train (kind of), when I booked a room at YHA Railway Square.

I’ve been to Sydney before, on two other occasions, in February 2011 and again in October 2012. On my first trip, I stayed at YHA Sydney Harbour, in the historic Rocks area which was amazing; they have a roof terrace overlooking the harbour. This area of Sydney is one of my favourites. On my second trip, I stayed at my current flatmates sisters apartment.

As my flight changes only got confirmed one week prior to departing, I had to quickly make a decision about where I could stay. I did look up the airport hotel, but this would have cost $90-110 – no thanks!

Then I looked into hostels. After a few reviews, I choose to stay at YHA Railway Square, which is literally right beside Central station. I knew this would be a winner for me, as in the morning I’d only have to walk a few minutes and I could be on a train to the airport (which takes 10-15 minutes and only costs $15.90 single). I might add at this stage that there is an airport transfer bus through YHA, which is $15, and leaves every 30 minutes, but takes a little bit longer. In the end, I opted to take the train.
So on Wednesday around 10am, I wearily wandered into YHA Railway Square. I had only had 6 hours sleep, and had been on the go since 3am. I was greeted by a friendly man at reception (who perhaps told me his name, but perhaps not, I was tired). I told him that I had a room booked for the night, to which he said “you’re only here for 1 night, that’s a shame!” and I said “aw yeah, but I have been here a few times before.” What I meant, was that I had visited Sydney before, not the hostel. 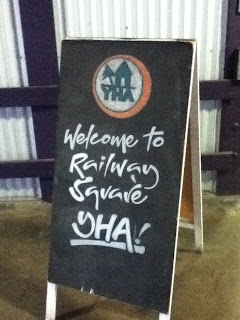 He played around on the computer for a bit, and then said, “aw yup .. I can check you in now, and as you are a frequent customer, I’ve upgraded you to a four share room.” I had booked an 8 share room for $32.
I said nothing, but instead went to find my room, and go to the bathrooms to tidy myself up a bit before meeting my friend for brunch.
The hostel itself is based, as I said before right beside Central Station. You walk about 2 minutes through the joining tunnel and up the stairs. The hostel itself looks like a train station from the outside, and even more so on the inside. 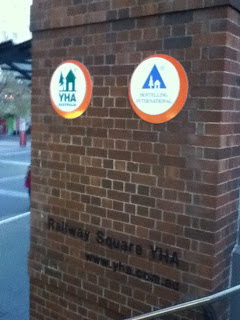 The big entrance way is large, and has a number of information boards around. There is a small cafe area, and a pool table.
Within the hostel, there are standard rooms, which are upstairs, or sleeper train carriages, which are on the “platform” as you go out. 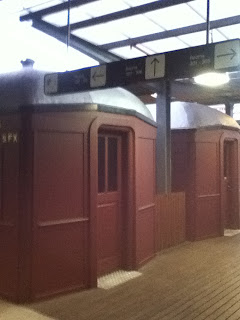 It is quite cool, as you here the trains in the actual central station when outside the rooms, so it does really feel like a train station.

The carriages are an old style, brown sleeper style. Inside there were four bunk beds, as standard in dorm share rooms, four lockers, a good power socket supply, as well as a heat pump. It was quite warm inside.
The only downside to the rooms were that the lockers were not quite wide enough for my rucksack, so I had to take this apart and use two lockers (luckily no one else was using a locker at the time).

I felt so blessed to have got into the room a lot earlier, as if I didn’t I would have had to pay for secure luggage storage, which the hostel has on offer.

The hostel is very secure – you are required to use a key card at the main entrance to the hostel, to your room, and to the toilets and shower rooms.

There did seem to be a lot of activities and events on offer, but this is not something I took part in, as I was only there for a short time, and had other things planned with my friend.

In short, I love this hostel for a number of reasons:

What I have learnt through the lockdowns
3 months ago

The first flight with our baby
12 months ago
Instagram has returned empty data. Please authorize your Instagram account in the plugin settings .
By continuing to browse the site you are agreeing to our use of cookies.
error: This content is my work and is protected