Planes, Trains and Automobiles: a return journey to Northern Ireland

Written by Abbi
How do you get from London to Belfast? Normally, a one hour flight. Not this time …

Not all travel experiences are good ones. Some people envisage travel as being perfect weather, great photos and friendly people; this is not so, and if it was it would make for a boring time travelling. Some experiences, although bad at the time help you in the future as you travel again, and make for good stories.

I thought about writing this a few weeks ago when New Zealand was preparing for the “worst snow in 20 years”. It didn’t arrive anywhere near Christchurch. In saying that though, it struck me as to how prepared people over here are for snow. Roads are gritted well in advance and measures are taken at airports to keep things moving.

In the UK, people panic and things almost come to a standstill. This post is about my attempt to get home to Northern Ireland from England for Christmas with my sister in December 2010. 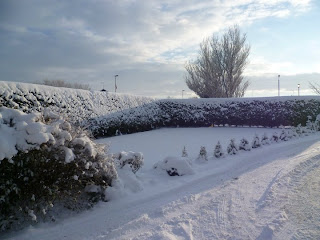 The Snow in our front garden (when we finally got home)
﻿

In December 2010, my Christmas holidays were limited, as I was using up a lot of my leave to travel to New Zealand in February 2011 (my first trip to New Zealand). I managed to get 6 days off, and I was due to have the week leading up to Christmas off. 17th-26th December.

So on Friday 17th evening, I left the small town of Boston, Lincolnshire to travel to London; flights were cheaper from London, and my sister was flying out that way too, made sense to have us both come in on the same flight. During my journey I heard a lot of mumblings about the possibility of snow overnight, but disregarded it, until I got to London, were it had began to snow. I wasn’t worried about it and thought that it probably wouldn’t settle.

In the morning we woke up to a good 10cm of snow. I knew we were in trouble. During the day, we kept a close eye on the London Gatwick airport website, as well as touched base with social media sites (EastJet via twitter). All were saying that the flights were on time and leaving as normal, we were also advised by whoever was writing for Eastjet’s twitter feed that we should make our way to the airport.

Our flight was due to leave sometime around 6pm. We got to the airport – massive queues and people everywhere. Flight cancelled. A lot of upset Irish people. The only flights they were letting go out were the big flights to places like the States and Australia (presumably as it would be a bigger hassle and expense to transfer these people onto another flight).

After speaking to an Eastjet rep, it transpired that we would not get on a flight until at least Tuesday (3 days away!), and indeed that all temporary accommodation (I.e airport hotels) were all gone.

So after sitting at the airport for another half an hour, we both realised that our bank account providers have free UK and EU travel insurance as part of our account service; so we thought we’d utilise that!

30 minutes later we found ourselves in London Victoria Station, in Wetherspoons pub enjoying a good warm meal and a few drinks (thanks to the insurance), when we decided to book into a local Holiday Inn, and catch a train and ferry all the way home.

We found the train routes and ferry connections called SeaRail through The man in seat 61 which I wasn’t aware of before. We paid £42, but I think it may cost a little more now, or perhaps it was because we used our Young Person’s Railcards.

After a shocking night sleep at the Holiday Inn Express in Old Street (probably only got 5 hours, we were up at some unearthly hour) to get to London Euston station, which happened to be a short bus journey away. We caught the train, with what seemed like half of Ireland. Time to breathe at last, we were on our way, and would be in our own beds that evening (Sunday). Or so we thought. 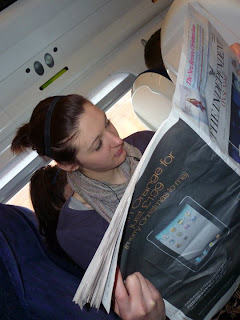 Relaxing on the train from London to Crewe

Our next train change was due to be in Crewe, to connect with Arriva Trains Wales to get to the ferry port in Holyhead by the afternoon. However, we stopped off in Rugby and were told that the train had to undergo “essential maintenance”  and we all had to get off and change trains.

After 20 minutes of a delay, we were off again. Upon getting onto the train, I passed a lady who had also got on, she was on here phone and announced in her poshest English accent “everyone on this train is Irish” – and that we were. Clearly the rest of Ireland didn’t want to wait around in an airport for 3 days. 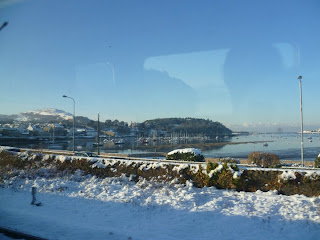 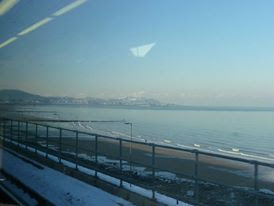 Part of the journey through Wales on the train. Despite the stress, it was pretty!

As our train was delayed at Rugby, we only just got onto the next train going to Holyhead – you should have seen how fast people ran (even in snow) from one train to the other. Unfortunately this train was a later one, and we all soon worked out that we were now going to make the 13.50 sailing with Stena Line to Belfast. However, an announcement by the train driver alleviated our fears; we were told our tickets would be transferrable to the other ferry company (Irish ferries) and we could sail to Belfast at 4pm. This wasn’t true. The tickets were not transferable and we ended up having to wait from 3pm to 2.30am for the next ferry, which happened to be going to Dublin and not Belfast (3 hours by train from Belfast). 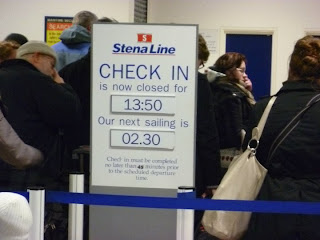 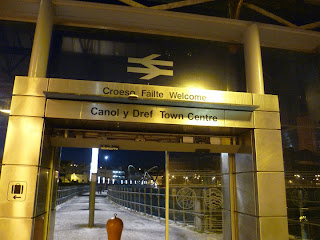 In the UK during the middle of winter, it gets dark by 3pm. This picture was taken sometime around 4pm. 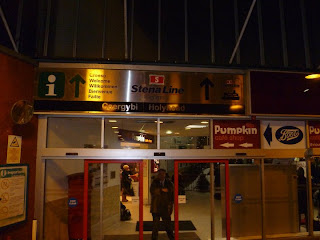 Holyhead in Wales is not a large town, it is a small port with very little to do, much less so on a cold winters afternoon. Our first port of call was to get food by 5pm. So we walked carefully into town and found a small Chinese restaurant, were a number of the Irish contingent had congregated. It was probably their busiest day on record. It was freezing outside, so we made good use of the Chinese buffet and warmth of the place for a good hour or so. During this time we made friends with an Irish lad called John who was on his own. He soon tagged along with us. We headed into town and stumbled across a small cinema, where they were playing The Chronicles of Narnia: Prince Caspian within 30 minutes of us showing up; not sure if it really was about to play, or they put in on especially as we were paying. We were 3 of 5 people in the whole cinema, but it passed a good three hours.

By 10pm we headed off to the pub, were in seemed like the rest of the Irish gang had been since 4pm – lots of people getting merry. The owners of the pub didn’t mind as people were buying drinks. We stored our bags in a back room, and kept warm, chatting to randoms and singing karaoke – not a bad way to pass the time. 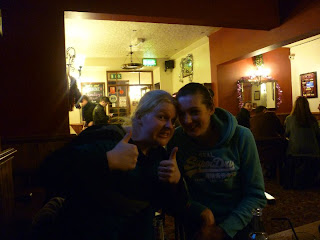 Just after midnight – by this stage we had been up since 5am. Starting to tire.

We left the pub around 1am and went to check in for our sailing back to Ireland (finally!). There were quite a number of people who had taken to sleeping on the ferry terminal floor, which probably wasn’t such a bad idea, as it was warm and quite late. 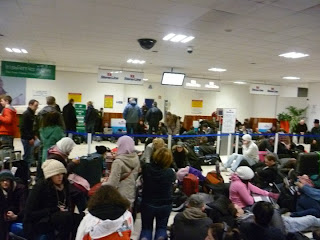 I think we boarded around 1am, and we found a good sleeping spot for our 4 hour crossing to Dublin. 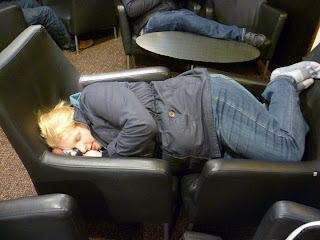 When you travel, you have got to learn to sleep ANYWHERE!

Our ferry got into Dublin Port just after 6am, and we got a bus over to Dublin Connolly station. 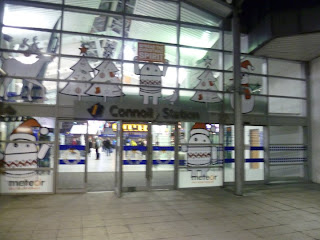 Our tickets did say London to Belfast, so we figured we could jump on the next fast train (the enterprise), which takes about 2 hours. However, the 7am train was cancelled, so we had to walk another 10 minutes over to the bus station, pay another £10 (as the ticket only covered trains, not buses) to get the bus to Belfast. This took 3.5 hours. Sleep on the bus was a little easier than on the ferry or packed train.

When we saw the iconic (to Northern Ireland at least) H&W yellow cranes we were so excited, as it meant we were nearly home. 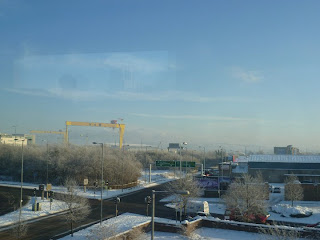 Leaving Belfast Central station (after changing trains for a second time between Great Victoria Street and Central due to a fault!)

Dad didn’t want to drive up to Belfast to collect us, so instead we jumped on another train and headed to Coleraine (hometown). I was so pleased to be home at last, to have a good warm shower and sit in front of the fire. We arrived on Monday 20th (my mum’s birthday) at lunch time, when we should have arrived back by the evening of Saturday 18th. 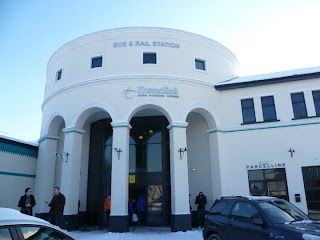 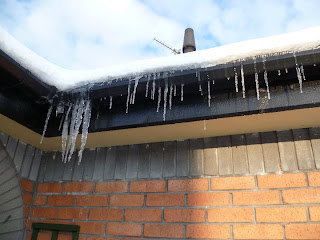 Icicles outside our house

(Christmas at home in 2010 passed as it normally does. Lots of food, family and general laziness).

On our return journey to London, we thought “at least it is one flight and we are back” this was true, we did fly back, but faced a 4 hour delay (thanks Easyjet!). 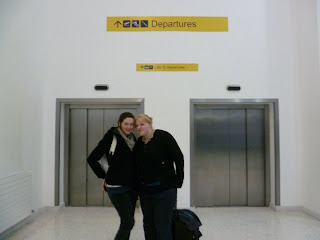 Preparing to leave Northern Ireland (looking happy, before we realise we have a 4 hour delay)

So by the time we landed back in Gatwick, we missed any connecting trains to central London.

This resulted in having to sleep on a bench at the airport – right outside the shuttle train line, so every 15 minutes there was an announcement saying “shuttle train approaching” “shuttle train departing” – I got very little sleep.

We immediately went back to my sisters flat, and slept for 8 hours! An epic journey. 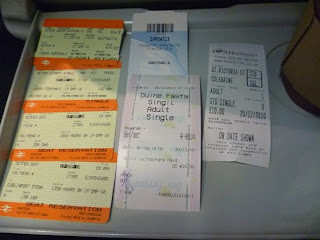 All the tickets for the above journey taken.