Abel Tasman National Park is one of the many National Parks in New Zealand, and is the smallest in the country. Last year around Waitangi day (a New Zealand National Holiday) I wrote about going to Kaiteriteri, which is on the outskirts of the park. It was such an amazing area, but we got rained out, so I vowed I’d return one day. It was somewhere on my sisters list, so we factored it in on our epic trip, during her stay in the country for the past month.
Our bus trip from Nelson took us around an hour and a half. We were pretty shattered after a sleepless New Years Eve. After being dropped off at Kaiteriteri, we found one of the only cafes in the small beach resort to get a big cooked breakfast to help us wake up. It was yummy, and so amazing to be able to sit outside at 9am and eat in the sunshine. 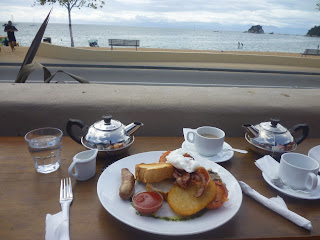 On 1st Jan 2012 I was sat at 8am in Heathrow airport, probably eating a similar (overpriced) breakfast, but I had come inside from a very cold winter wind.
I had done very little planning for this leg of our epic tour of New Zealand, and as I had been worked a few days before, which was crazy busy, I didn’t have much time beyond print off tickets for the bus. After our breakfast we headed over to the water taxi stand to book a water taxi. It was at this point I realised how coming to Abel Tasman NP with a suitcase was totally impractical (lesson of 2013!). 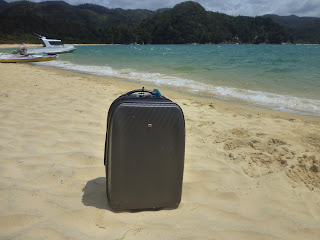 If I had brought a neat little backpack, which I have and did consider before going, we could have Kayaked from Kaiteriteri to Anchorage Bay, where we were staying, and just paid a return free for the Kayak. However, you live you learn (I seem to say that a lot – must have learnt a lot in a year).

We got the water taxi around lunchtime and went via Spilt Apple Rock, which is somewhere I briefly stopped at in Feb. It is stunning: 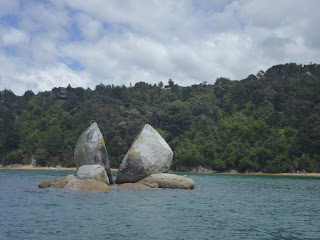 The journey on the water taxi was fast and very windy, but we got a great tour of around the park.

We arrived on Anchorage Bay, armed with a bottle of wine and a few snacks. We then realised that we had a four hour wait on the beach before boarding the boat we had booked to stay on. 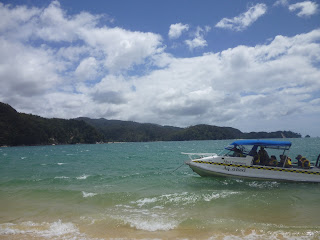 We stayed on something called aquapackers, which is a fair size of a boat converted into different rooms for people to stay. We stayed in the dorm section which cost $70 per night, but included breakfast and a BBQ dinner. Well worth it. http://www.aquapackers.co.nz/

As I brought a suitcase, we were unable to really do anything apart from swim and sunbathe. We both ended up VERY sunburned. This is a lesson I never really learn from I don’t think. 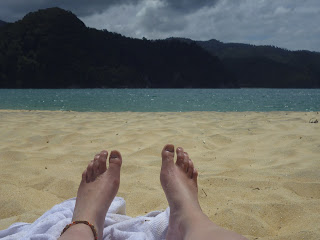 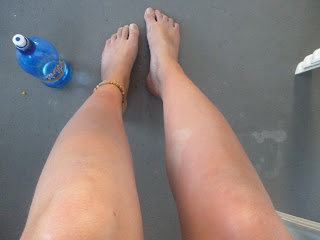 Around 4pm we were collected by the owner of the boat, in his inflatable power boat, where again I was reminded of how ridiculous a mini suitcase was with everyone else (my sister included had a backpack).

The first night was awesome. We jumped from the deck of the boat into the water, and spent time getting to know a few of the other people on board, although most of them were German and didn’t chat too much, but played a couple of board games and had an amazing BBQ of steak, sausage, rice and salad. 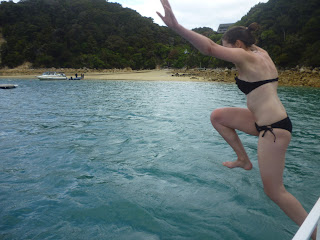 The experience of sleeping on a boat was awesome, although I have many experiences of this as a young child with being on the ferry with my dad on very stormy nights. The dorm room was under the deck, so we felt very much like little stowaways. 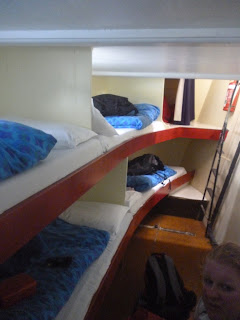 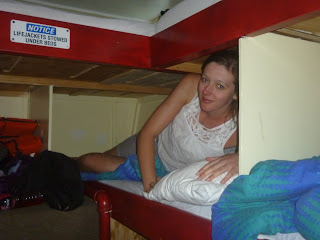 Very small beds, which was difficult for my very tall self to slide into. I imagine that beds on the cabins of the trans Siberian railway would be like this. This is something I’d love to do.
Slept well despite my sister snoring.

Day two we had our simple breakfast of cereal and toast and were dropped off onto the beach by 10am. There weren’t many options for us, as it was a bad weather day and all Kayaking trips were cancelled, so we decided to walk to the next village along. Primarily to get sunscreen and food, as we set of with very little sunscreen, which was a bad idea seeing as we were very burnt. Had one bottle of eater each and a couple of cereal bars. SO unprepared. 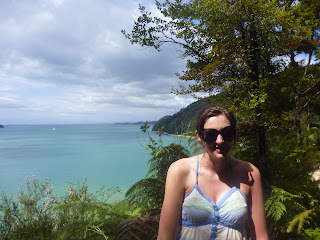 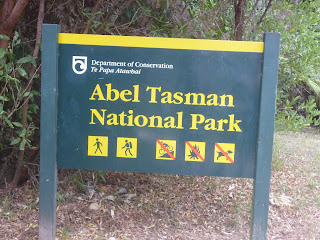 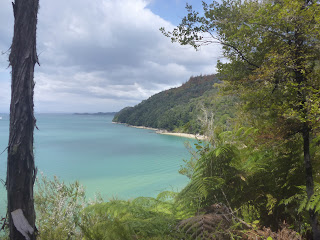 We got to the village, and had to literally run to the water taxi centre to catch the last water taxi, were we paid a crazy amount of money for another water taxi, sunscreen and food.
The weather started to turn nasty and we got totally soaked sitting on the back of the water taxi.

Again we were let on the beach for another 2 hours until the boat was ready to collect us again.
The weather got a little crazy at this stage and started to chuck it down. So we sat in the DoC hut and read about the park and spoke to a few other travellers. At this stage I felt a little gutted that I wasn’t prepared enough to hike a bit more. I thought that doing the Duke of Edinburgh – although that was 10 years ago now, would have prepared me for this, but clearly not.

New Zealanders really are very outdoorsy and are very prepared for everything like this. Perhaps one day I will return here to properly walk through the park.

One last night on the boat was very stormy. The window in our dorm room got battered open by the water and flooded the floor, and most of my sisters belongings,  so it wasn’t a really good start to the night.
The crowd of people that were on the boat this time round were amazing, very friendly and social, so we sat up with them for a wee while having a few glasses of wine and talking about what our travels had entiled. 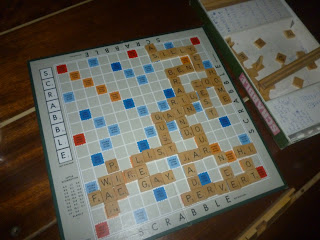 One thing a Scottish couple had talked to me about was that when they arrived in New Zealand, they decided against trying to fit everything in in one big go, but to spread it out, as come to the end of a certain period you would run out of things to do and places to go.
I now worry about this, as I have crammed in a lot over the last year. However, I’ve still not walked the Milford track, been to Milford sound, the Coromandel or Hawkes Bay. I’d also love to do the Mt Torringoro (volcano crossing) as well as white water rafting and cave climbing. So still a lot to fit in.

On our last day in the AT. We had a few hours to wait until the first water taxi made it to us. It was around then that we realised how remote we were. We got back to the mainland of Kaiteriteri and finally had phone signal. Between us we had about 10 missed calls and several messages. Family were worried about us as for the past 3 days they hadn’t seen anything or heard from us.

We got the bus back to Nelson, were we had a wander around and a bit of a late lunch of pancakes before our flight back to Christchurch. 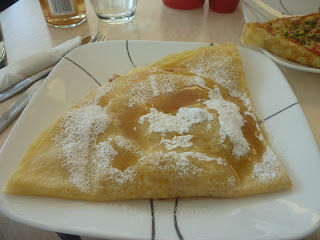 Back at Nelson airport, my sister and had quite a laugh about the size of the place. There were no screens or many announcements about flights, so we wondered if we had to guess the flight. The plane we got on was tiny, but comfortable. It was my first flight of 2013.

I arrived back into Christchurch this evening, and couldn’t quite believe its been a whole year since I arrived into the country. I am very excited about showing my sister around what has been my new hometown for the past year. I hope she likes it too.