The Seoul of Asia, day two

My second full day of exploring the capital of South Korea, was again very unplanned. After day one of getting lost a few times I just thought I’d go with the flow and wander and see what I came across. 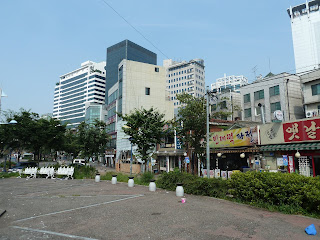 Hongdae at 10am .. barely anyone around (I found that although places stayed open late, the place didn’t get going until 11am) 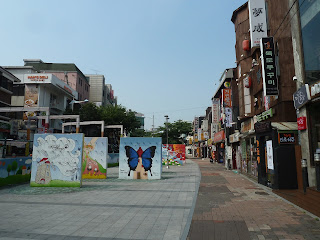 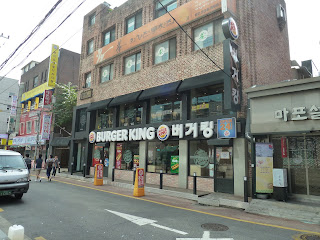 I initally headed on the metro to the National Assembly station, as I knew this was the area where the largest church in the world was Yoido Full Gospel Church, which has over 80,000 members and many more international visitors at services. The church was a short 10 min stroll from the National Assembly station. It wasn’t as big as I had imagined (though I didn’t look inside). 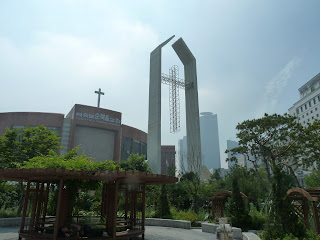 It was my intention to visit the church on the following day (Sunday), prior to leaving for the airport. However, with the faff that I went through later in the evening, I ended up being quite late home, had not packed and so needed to sleep. I fully intend to visit again at some point.

After seeing the church, I noticed the Han River seemed relatively close by, so I took a stroll down towards it. Being brought up on the coast of Northern Ireland, I really love being near to water or the sea. The river seemed to stretch forever, but it was a gorgeous walk. There was a park area, and a lot of children and families cooling off in the fountains. 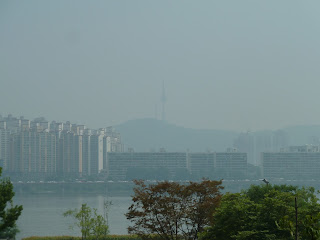 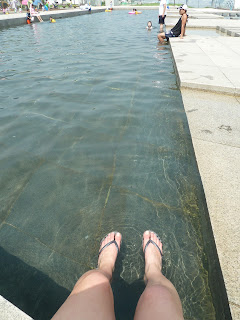 Cooling down in the fountain 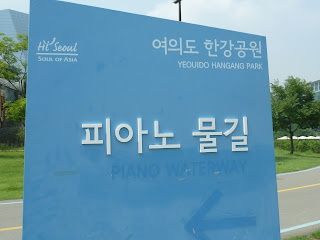 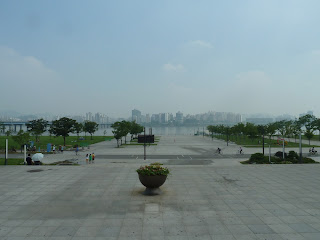 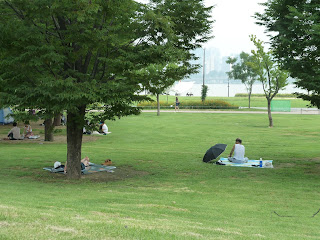 I continued to read my guidebook, to see what else was in the area. A 20 minute walk along the main road took me to 63 building, which is one of the tallest buildings in Seoul. It is full of retails outlets, an entertainment complex and offices. It was huge up close. 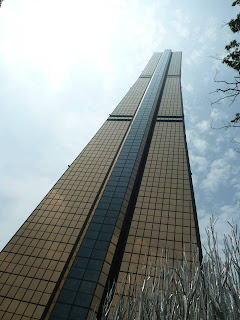 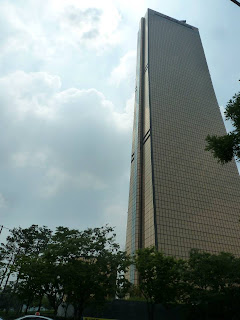 By this time, I was getting hungry, so decided to go to one of the larger markets – Dongdaemun. It was the busiest, biggest, craziest market I have ever been to. There were people everywhere, with a number of local market holders whizzing around in mopheads with huge parcels on the back. 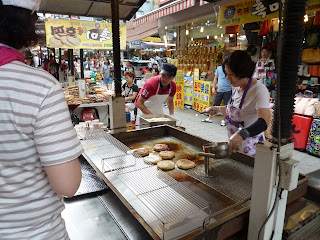 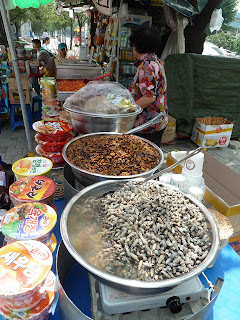 I have no idea what this is, but the woman at the stall said it was beautiful 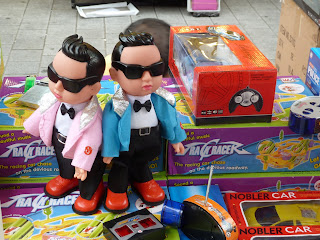 I spent a good few hours in this area, picking up a few souveiners, street food to nibble on (I actually found someone selling pinapples and melon on sticks – after not eating properly, some fruit was so refreshing). I found some Korean chopsticks, which were a challenge to eat with, but I wanted to take them back to practice my technique.

One thing I found which suprised me a little about this market, was that haggling seemed to be frowned upon. I bought a fan to take back with me, which turned out to be very practical, as it was roasting. They aren’t tourist tack – locals actually use them. I asked the price for one (3,000 Won), then I asked how much for 2; hoping she would say 5,000 Won … but she shouted at me in Korean and walked off to another part of her stall. You can but try.

After walking around for a few hours, I couldn’t stand the heat anymore, and decided to get into the shade. I spotted a little cafe called Cafe Sori, which advertised Korean dessert. I went it. It was wonderfully air conditioned. I got a freshly squeezed lemonade and Korean Caramel bread. It was so sweet, and full of calories, but surprising cheap (5,000 Won for both).

After this, I wondered a wee bit more through the market. It had wonderfull little alleyways full of so many things to buy. I bought a few new pairs of light 3/4 length trousers, which were super comfy, and cost the equvaliant of One British Pound – amazing (though the quality wasn’t great – they are wonderful to travel in!)

My next stop took me to Gangnam; this was somewhere my little sister wanted me to go. She actually wanted me to have someone take a video of me doing the Gangnam style dance. I didn’t, but I did get a photo of the metro station, and wondered into the Samsung D’light digital playground.

Before I headed back to the hostel to recharge my camera, pick up some more cash (I don’t travel with a lot of cash in my wallet, I take roughly what I think I need for a certain time span) and have a shower, I headed over to Olympic Park. Seoul hosted the Olympics in 1988, and have a huge Olympic Park, which is still in use, which is great. In Sydney, Olympic Park is largely unused, and a little baron. Here there were lots of people wandering around taking photos, youths on skateboards, and people sitting in the sun. In 2011, the Olympic Hall in the area was renovated and now is used as a concert hall, which I think is fantastic. The amount of money spent on the Olypmics is crazy, especially if the area goes on to be unused.

You can get to Olympic Park on the metro by going to Olympic Park stadium, which is a short 5 minute walk. I would however reccomend getting off at Mongchontoseong Station, exit 8. You walk out and the first thing you see is the World Peace Gate – it is amazing! 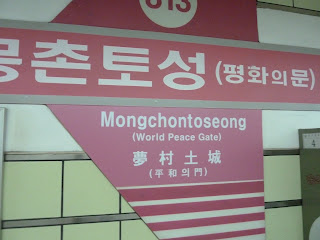 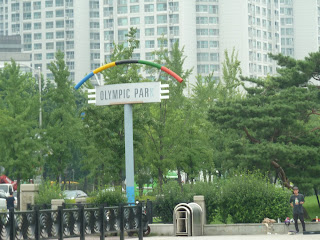 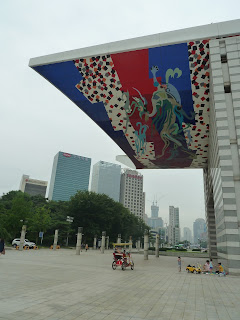 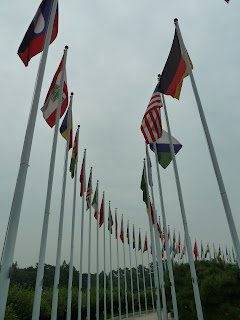 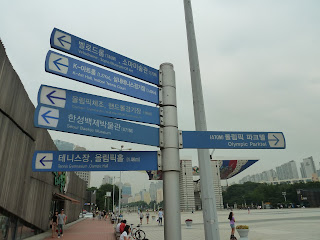 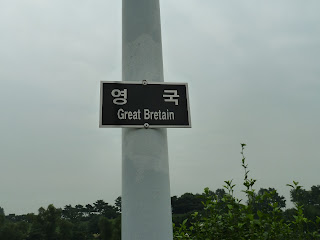 I walked around for an hour or so – there is so much to see and do. The flag Plaza was great to wander through, I had no idea there were so many flags/countries. It spaked my desire to travel again.

During my time at Olympic Park, an American lady ran up to me and asked me to take a photo – she had been walking for 6 hours from the North of Seoul to the South. I got her to take my photo too. 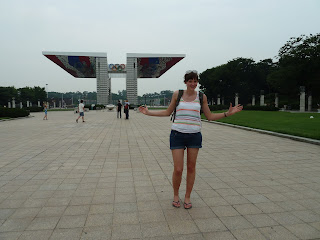 At the peace gate, Olympic Park

One thing I didn’t take into account about Seoul was the distance between places. I almost felt like I could jump on a metro and be wherever I needed to be in 10 minutes. The hostel I stayed in, was amazing, but it took a long time to get to the main sites.

The rest of my night was spent getting to and from N Seoul Tower … and we all know how that one ended!

My time in Seoul felt incredibly quick, I was quite sad to be sitting packing in my hostel at 3am. It is somewhere I hope to return. It was a lovely insight into East Asia, and the longest time I have spent in Asia in general.

If I had more time, I would have definately done a DMZ tour, as well as explored outside of Seoul (particularly the South).

Malacca City: The Best Place To Explore In Malaysia?

5 Exciting Sports to Experience in Thailand

Planning a Trip to Southeast Asia? Here’s What You Need to Know
1 month ago

Malacca City: The Best Place To Explore In Malaysia?
1 month ago

Perfect Packing For A Sunny Vacay
1 month ago

Adding An International Twist To British Food Favourites
2 months ago
Instagram has returned invalid data.
By continuing to browse the site you are agreeing to our use of cookies.
error: This content is my work and is protected