I think one of the reasons I love New Zealand, is because it reminds me so much of home, except with better weather. Many times throughout this past year, I have been surronded with such amazing scenery and been in awe, then said – this reminds me of home.

The Catlins in South Otago, is approximately a 2 hour drive south of Dunedin. If I am able to go back, I will spend a lot longer. We probably spent about three hours there, and continued our journey south. The first place we drove to was Nugget point, via Kaka point which is a seaside resort not far from Nugget point. The road was unsealed for at least 16km of it, so our car got very dirty. It was a very very hot day, which made the scenery even more outstanding.

Nugget point is on the Northern coastline of the Otago Pennisula, and has a number of nugget shaped rocks (islets) in the sea. It took about 15 minutes to climb the steep hill up to the lighthouse and get to see the view. It was stunning and I could have sat there forever. 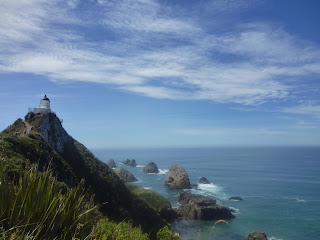 After this, we continued our journey even further south, and stopped off at the Purakanui Falls, which apparently are one of the most photographed waterfalls in New Zealand. I was hoping to be more impressed by them, but wasn’t. They were nice, but definately not a ‘wow moment’

Our journey continued even further south, to the very south that is. Before we started our trip, I had always wanted to go to the furtherest point south of New Zealand. I was always lead to believe this was Bluff, but infact it is not, it is a wee place called Slope point, just around the coastline a little. I think it took another hour from the Catlins to Slope point, again on a bumpy, unsealed road … but it was worth it.

When you get to Slope Point, there are a row of trees to the far left of the track to Slope Point, which are called the windswept trees. I am not sure what type of trees they are, but they are bare and quite dry, and bent over as if they have been caught in a windstorm. Very cool.

The walk down to the point was through a little track on a field, it took about 15 minutes. At the end there is a moderate sized round white tank. I later found out it was a navigation system.

There is another one of those AA signs at the bottom with a sign towards the Equator and one towards the South Pole. This was seriously cool. So at the point we were at, the South Pole was only 4803km away. It wasn’t as cold as I was expecting, just very windy. 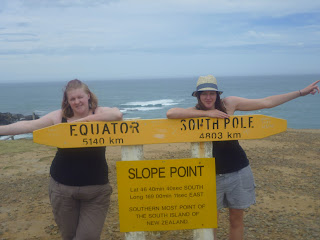 The only few things I did query with our geographical location was whether we were the at the most southernly point in NZ, as Stewart Island, which is off the coast of the South Island, is part of New Zealand. So surely that should be it? However, if the AA sign said it, it must be true. The second thing I queried was whether we were at the most Southernly point of the world, although when I questioned that, I knew the answer was the South Pole. But I guess what I mean is the next land mass closest to the South Pole, a quick check of my map revealed that is most definately South America.

I really I’m not as down with Geography as I’d like to be as a traveller.

As we were walking back to the car, we met a South African/German girl (born in Germany, but lived most of her life in South Africa). She had been working in Greymouth in the mines for the past 2 years, and was recently laid off, so was packing up to go to Perth to work in the mines. She said despite being in New Zealand for that length of time, she had not done a lot of travelling, it was always one of those “I’ve got plenty of time to see that”. Made me glad that I have seen all I have seen. Particularly with the earthquakes in Christchurch, it makes you realise how fragile this world is.

After taking many photos, we were on our way. The drive to Te Anau, via Invercargill was another 2-3 hours, but it seemed to take a lifetime. We stopped off in Invercargill, another place I had never been to. To be honest I didn’t think much of it, though it was 7pm on a Sunday night and it was raining. We tried to find somewhere to eat, but nothing was open, so we had to settle on a KFC.

Most amazing thing I saw in Invercargill was a giant sun dial shaped like an umbrella. I thought this was fairly appropriate, as Invercargill probably doesn’t get much sun, but more rain! 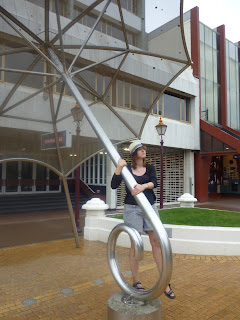