Bay of Islands and the Far North, New Zealand

After saying an extremely tearful goodbye to my dad at my Aunt’s house in Auckland (his short visit unsettled me a lot more than I expected), my sister and I headed off up to the Bay of Islands: a journey of approximately 3 hours.

﻿﻿Prior to leaving Queenstown, we got a phone call from our hostel that I booked three weeks earlier; the Pickled Parrot, we were told that they had double booked our room and there was nowhere for us to stay. We weren’t that impressed, but she said that she would book us in at another hostel close by: The Peppertree lodge (sounded ok!)
So just before leaving, I gave them a call, and he had got the referral on from Pickled Parrot , but wanted a credit card number to secure our booking as we would be arriving after 11pm. We were told that the office was closed and that the key would be left in an envelope stuck to the office door (secure!)

The drive was pretty unremarkable, it was quite dark and so my sister and I sat and properly caught up and talked about the good times at home. Spending this amount of time with my family had really made me miss the fact that I could see them every weekend if I wanted to.

We arrived at the hostel around 11.45pm; quite late. No parking on the street, and right opposite the Base Backpackers, so it was super noisy. We parked right in beside the hostel office door, as we didn’t want to drag our stuff for 15 minutes in the rain.

Arrived at the hostel office and there was no key for us, only a key for some other girl who had not arrived yet. We had contemplated taking that key but were worried that the other girl would arrive. Attempted to call the owner on the after hours number, but no response.

With nowhere to go, we thought about sleeping in the car, but thought that the hostel already had our credit card details, so we needed some sort of a bed. We later spotted an open dorm room on the first floor. The beds were made up, but noone had belongings in them, so we decided to squat in it! By this stage it was after 1am, and we were due to catch a coach to far north at 7.15am.

I think it is safe to say that I had one of the worst nights sleep this year; I constantly woke up thinking someone would come in and kick us out, and as there was no key, it could have happened. Woke up at 5.30am, showered and then realised that we had no food for breakfast. I think we had some dry cornflakes, half a bottle of water and 2 bottles of cider!

We also realised that someone had come in after us and parked behind us, which was not great news as we had to move to get our coach. We packed up our car and luckily the office manager appeared at 6.45am. His side of the story was that the credit card number was incorrect and so he didn’t leave us a key. So he didn’t think that ringing me back and letting me know this would be a good idea?! If he had brains ….

We got the car moved and expressed our annoyance at our situation, but still had to pay full price for the dorm room, which happened to be an ensuite and a lot more expensive ($30 per night). We managed to get to the bus stop 15 minutes earlier than when we were due, so we speeded down to the local 4 square, which is the kiwi version of somewhere like Spar at home. Did a quick supermarket sweep and gathered up some items for breakfast.

So our day (23rd) was planned out in advance with a trip on the Fullers bus trip to Cape Reinga, which is the spiritual home of Maori; our were the Maori’s believe their spirits go when they die to cross over to the other side. 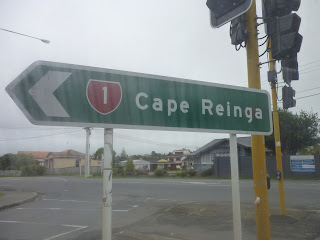 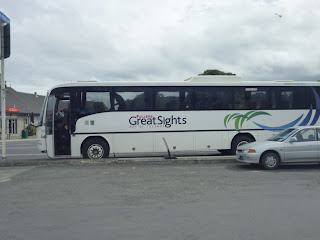 Our bus driver was a Maori man and so was pretty awesome at telling us cultural stories and the meaning of Maori words. We found out that Kia means life! 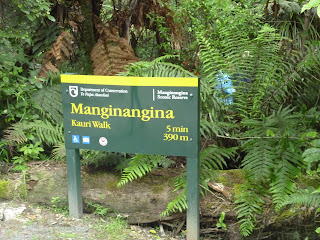 Our first stop on the trip was at the Manginangia Forest, were all the Kauri trees are. It was still quite wet and overcast, but the vastness of the forest was just amazing.

After the forest, we continued to head up north towards ‘the cape’ getting an informative talk by the driver, a lot of which I have forgotten now.

On the way, we stopped of in the best bakery in the world; according to the bus driver. Though I think that was a bit of an ambitious title. It was ok, and again we picked up some additional things for lunch. I had a pizza bread for a second breakfast and we were on our way again. 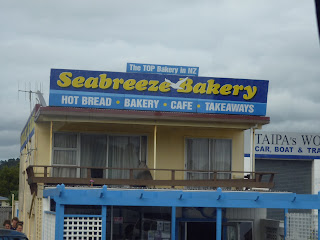 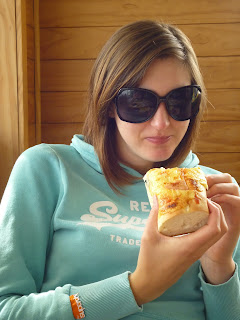 We continued to drive on for another hour and got to 90 mile beach, which in actual fact isn’t 90 miles long, it is 55 miles long. The name came about from when people travelled on horseback, and the theory that a horse could go 30 miles per day, and it took 3 days (as they didn’t take into account the travel of sand and the need to rest) to travel the length of the beach, therefore it was renamed 90 mile beach. Makes sense.

The beach is a huge tourist destination; several tour buses per day travel up and down. 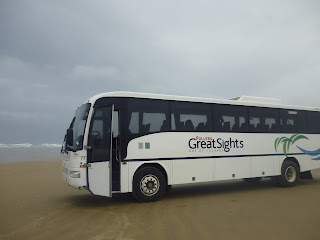 ﻿﻿We drove full pelt along the sand and stopped, had a little paddle in the sea, waiting for our bus driver to catch fish. It was rather windy. 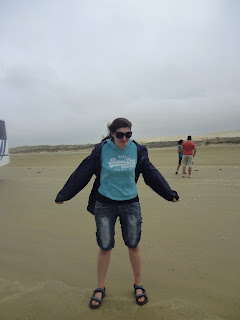 After this, we drove further along the beach, and got to the infamous sand dunes where we were to sand board. The hike up the hill was crazy as it was steep, but really windy. Normally weather around this region is really good for sandboarding, but according to our tour guide, it was the worst day he had seen in a long time; we were getting the tail end of hurricane Evan.
Ive done sandboarding in the past at home and it has been fun. However, I only managed to get halfway down, before falling off, due to the amount of sand that was flying in my face. 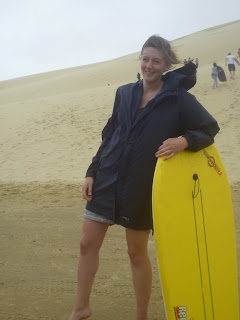 After getting up off the board, it suddenly flew away over the hill in a flash; this felt like deju vu with my runaway snowboard incident.

After this little adventure, we headed up to the Cape; we were told during the trip up there that it is considered to be disrespectful to eat around Cape Reinga. We were given approximately 45 minutes to wander around, which we thought was amble enough time, but it took a lot longer to get down to the Lighthouse than we thought.

It was a pretty cool experience being at the very top of the North Island of New Zealand, seeing as we had been at the bottom of the South Island 1 week prior. 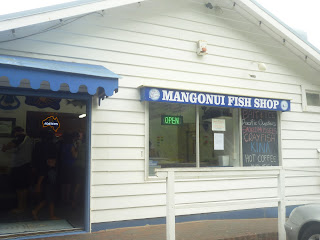 ﻿We drove back to Paihia and arrived around 5.30pm, just in time to talk to my dad one more time before he boarded his flight back to the UK.
Our next stop on our Christmas adventure was Whangarei, which is a midway point between Auckland and Piahia. Our original intention was to go and scuba dive at the Poor Knights Island, which is something I did in 2011. However, some things never go according to plan, and as the weather was quite shocking, this got cancelled. We heard earlier in our journey that the storm was to get much worse, and so we decided to call the hostel (YHA) I had booked. I called to cancel, which is just as well .. it turns out that I had actually booked the YHA in Wanganui, which is on the east coast of the North Island near Wellington.
Could have been an interesting evening if we showed up looking for a room.
We sped off down to Auckland to stay at my sisters friends place for the evening of the 23rd. It took us just over 2 hours, which we thought was good going.
Arrived just in time to see an amazing sunset.
The evening before Christmas eve was spent cuddled up on the sofa, eating Chinese food and watching Love actually. It felt quite Christmasy, but not as much as it would in the UK, what with the 23 degree weather.