When I lived in the UK, I was never a real ‘snow bunny’. Snowboarding or Skiing was never something I was interested in doing. Perhaps as I had the perception that it was only for people that were a little better off, and I never had the desire to spend money on flying to Europe, paying for lessons, gear hire and accommodation. I’d much rather pay for a holiday to a warm part of the world.

However, I knew that when I came to New Zealand I knew it was something I would have the opportunity to do here, so I had a skiing lesson in December, before I left, but didn’t overly enjoy it. I always thought snowboarding looked cooler.

In New Zealand it seems that everyone gets involved in doing a snow based activity during the season. Most people I have talked to either go most weekends of the season, or go randomly throughout the season. So I thought, ‘when in Rome.’ Also, I am in a pretty good spot in terms of getting out on the snow There are a number of ski areas between an hour and two hours from where I am, so it means you can go there and come back in one day.

3 weeks ago, which happened to be the first Saturday of school holidays here (June 30th), I thought I’d give it a go, and it wasn’t that busy surprisingly enough.

At the time, I was house sitting, and so had use of the owners car. So I drove up to Porters Ski Area, which is in Castle Hill, on the way to the West Coast, in Canterbury. It is the closest ski field to Christchurch. I got up at some horrible hour (about 6.30am), got ready and left to get to the bottom of the mountain by 9am, to catch the free shuttle (Porter’s Snow Bus) 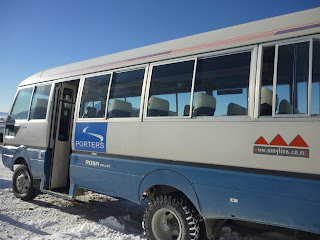 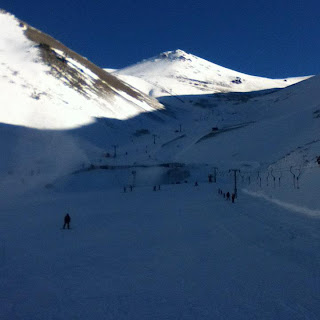 Beginners Slope at Porter’s Ski Field
I decided to book a private lesson for my first time, which turned out to a pretty sweet deal. I think I mentioned previously, but I bought an entertainment book, which gives you discounts on a lot of things from cafes to events and days out. So I think I got about 20% discount off a lesson, which was great. My lesson was booked for 11am, and I was on the mountain for 9.30am, so had a wee bit of waiting around to do. However, I didn’t feel confident enough to even put on a snowboard, let alone set foot on the snow.
I met with my instructor on the beginners slope, (his name escapes me at the moment) He spotted me pretty quickly, probably as I looked quite clueless and was struggling to carry my board. He later taught me how to properly carry a snowboard and said I looked like a pro!
The lesson was for an hour, and went pretty quickly, but I got the basics. I later went and mucked about myself. I fell A LOT! The beginners slope also has a t-bar lift. Which is basically a wee round disc shape on a rope, which you can either stick between your legs or under your arm. I found this extermely difficult to master, and fell off on a number of occasions. I did make it to the top quite a few times, and managed a good few runs from top to bottom, without falling.
This weekend (yesterday) I decided to go up again. I had bought two vouchers for half price snowboard hire from a website valled grabone (www.grabone.co.nz) which I guess is similar to groupon in the UK. However, these vouchers expire on August 9th, and so this was the last weekend I could have used them, as I am in Fiji next weekend for a week and then in Auckland the weekend after.
I was toying with the of getting a bus, or trying to persuade one of my friends to drive up to Mount Hutt. Then I discovered SnowPool (www.snowpool.org) which is basically a website for car sharing to the Mountain. You get a list of countries, then click on the mountain you want to go to, and it gives you a list of all the people that are going up, or want to go. Normally the snow shuttle from Christchurch costs about $65, but I only paid $20.
I went up with three other guys, who were all fairly snow happy, and normally go every weekend (both days!). One was from London, and moved here 2 months ago, another was from South Africa and moved here 6 months ago, and the other (the driver) was from NZ.
So after a really early start (I was up at 5.30am), I picked up my gear hire, and met the guys at the drivers home, and left at 7.15am. We got to the mountain by 8.30am and got ready to go out.
As I hadn’t snowboarded in 3 weeks, I started off on the beginners slope, which in Mount Hutt, I didn’t enjoy too much. It is quite narrow and short, with very little incline. So by the time you get going, you are at the bottom. There was also a lot of little kids, who stopped dead in the middle of the slope, and so as I wasn’t quite skilled enough to try and turn and avoid banging into them, I fell.
The snow coverage wasbn’t as great as 3 weeks ago, as there it has been sunny and with little snowfall, so some areas were like ice, which really hurt to fall on. The beginner’s slope was easier to get up to, as it had what they call a magic carpet, which is basically like a long escalator, or moving walkway, built inside a long line of shipping containers. It wasn’t as easier to get off at the top however, as a lot of people stopped at the top, so you’d scoot off and bang into some other poor soul!
After lunch, I went up with the other three guys to the intermediate slope, and mastered the chair lift a number of times without falling over, win!
The intermediate slope did seem like a big old difference from the beginners, it was much steeper, wider and had more turns in it, but I gave it a good go. The guys that I was with, gave me great tips, and took me down on a good few runs, which was essentially like having a free lesson. I got my fall count down from 5 or 6 in one run to 2 in the last run, so I was quite pleased with myself.
After the journey back, I literally ached everywhere! I didn’t do ANY warm ups or stretches beforehand, which is a pretty stupid idea on my part. I go to the gym fairly regularly, and warm up/stretch before what is usually 1 hour of exercise. This was 6 hours of extreme winter sports. It even hurt to lift my arms up to my head to wash my hair this morning. Next time I will be a little more wiser (I hope).
Overall, I think I enjoyed Mount Hutt for the atmostphere, and possibly because it was the place I achieved the most.
Hoping to go up again in the next three weeks or so, I may invest in some wrist and back protectors though. Some falls were not pretty at times.
I could honestly do with a massage about now. I had a long soak in the bath last night, but I am still rather sore.

What I have learnt through the lockdowns
8 months ago