Jumping off the Sky Tower in Auckland, New Zealand

Continuing on the theme of adrenaline fuelled activities in New Zealand, I thought I would briefly write about my experience of jumping from the tallest building in the Southern Hemisphere; Auckland’s Sky Tower (as well as the Sky Tower in Auckland itself).

NB: The Sky Tower stands at 328m tall, with its radio transmitter on top. The Q1 building in the Gold Coast, Australia is the tallest residential building in the Southern Hemisphere.
I have also just read that work has begun on a new skyscraper in Melbourne, which will take over the title of the tallest building in 2018.

The Sky tower in Auckland is 328m tall and dominates Auckland’s skyline. Like many other big cities, it is a great place to get a view of the whole city. Although in Auckland, I found that climbing Mt Eden, or even going to the top of One Tree Hill gave you a good enough view over the city, without the price tag, and associated tourist traps, which I enviably fall for at times (I just needed to buy a t-shirt after the jump, as I didn’t ever think I’d be back in NZ) 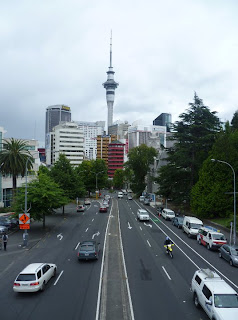 The Sky Tower by day and night 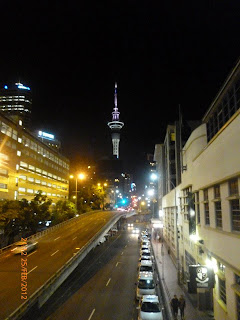 Admission into the tower (to get to the viewing deck) costs $28 for adults or $18 for backpackers and students (if you have a YHA or BBH card). This will get you access to the entire tower including the 220m skydeck. For an additional $2 you can return on the same day (this is known as the sun and stars upgrade). It is always nice to see it at night too. The price is less if you just want to view from 182m ($25/$15 adults/backpackers). The higher level is much more amazing. 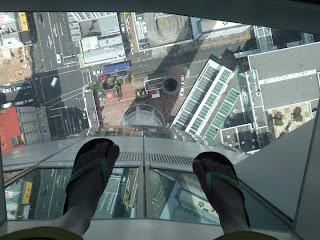 A long way to the ground: from the 220m Sky deck glass floor 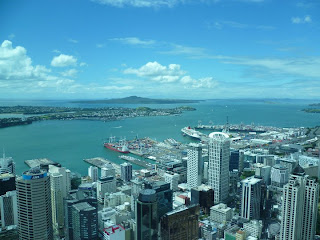 One of the views over the city

On one of my first evenings in New Zealand, I was treated by my family to a meal at the Orbital restaurant, which is pretty high end pricing, so that was lovely. As you are having a meal there, you do get an admission to the sky deck viewing platform too (you would think so to be honest). The Orbital restaurant was lovely, it rotated around at a slow pace, but quick enough for when you got up to the toilet you lost your seat. It was so lovely to sit and see a different view out of the window every now and again. 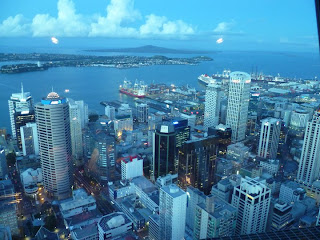 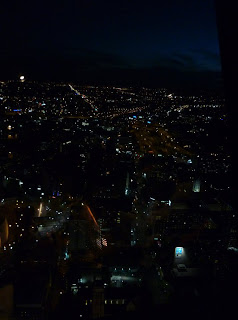 At night (getting photos through glass is always hard)

This was a relatively unplanned activity, but not content with my recent accomplishment of Skydiving 2 days earlier, I decided to take on the Sky Jump (plus I wasn’t quite brave enough to do a bungy jump at that point!)

On my last two days in New Zealand I still wanted to do something different. I had looked into doing the Sky Jump on my first few days, but wanted to wait until the end of my holiday to see if I had enough money left.

I booked it the day before, and there were plenty of spaces. So in the early afternoon, my mum and I wandered up to the Sky Tower. I was a little worried about not having proper footwear, I was wearing flip flops (Jandels/thongs), and had considered trying to buy some cheap covered footwear (no such luck in Auckland). However, you are given a pair of covered shoes when you get there.

After paying the $195 (backpacker price. Standard adult price is $225), and signed the consent forms I was pretty ready to go. It is not cheap, but I had extra $ left over that I had budgeted for. I could have exchanged this at home, but this seemed like a better use of my money.

In Auckland, and in many places in New Zealand (mainly airports) there are discount books from www.jasons.co.nz within this, there was (at the time and possibly still is now) $25 off the Sky Jump or the Sky Walk.

I was the only person booked in for the slot of the early afternoon, so the whole process of getting my gear on and having the safety talk went a lot quicker. 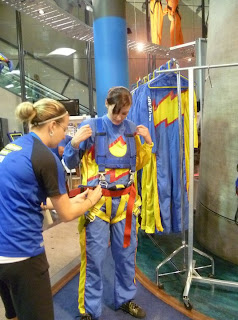 The area where you jump off isn’t quite the 220m where the viewing deck is, nor is it right at the top of the 328m structure. It is at 192m, which to be honest when you look down is high enough.

I took a lift up and was met at the top by a couple of friendly kiwis. The explained everything, and we did the cheesy waving to the camera thing a few times, as well as got photos.

When I walked to the edge, I felt as though I was about to walk the plank. For someone who loves risky activities, I was a little nervous. I just looked at some of the big skyscrapers, which when on the ground looked massive; they looked tiny from the height I was at. 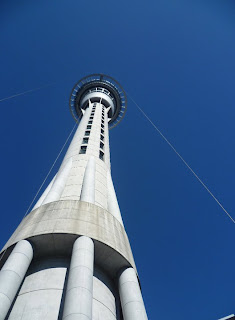 Looking up from the ground: It’s tall!

I decided that I would have to jump on the first attempt, as I knew it would look bad if I stood there like a lemon. Unfortunately the DVD I bought is currently at my parents home in the UK, and I didn’t ever get the chance to rip it onto my computer to upload it to YouTube. (This will be a task for when I return in August). It is quite comical to be honest, as rather than jumping, I just looked like I stumbled off the side.

It was a really fun experience, though I didn’t fall as fast as I thought I would. There is no real free fall as such. It is more of a controlled base jump. After you jump, they stop you at 180m so that the people in the viewing deck can wave at you, but also so that they can get a photo of you pulling your best superwoman/man impression. 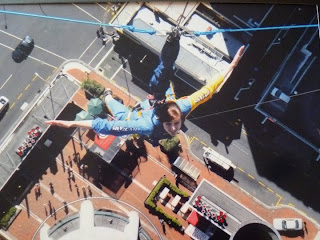 My mum also took some photos from the ground, all whilst thinking “please put my daughter down!” 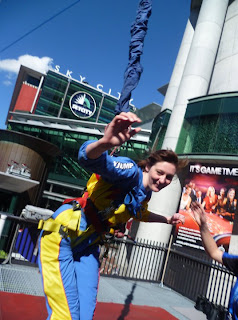 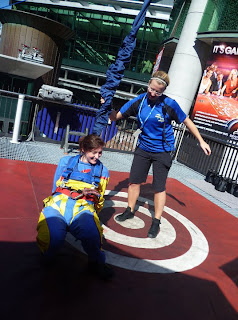 When I got to the bottom, they told me that it wasn’t busy, so I could do it a second time for FREE! Of course I said yes. To be honest I think they felt sorry for me that I didn’t look too cool doing it the first time round.

The second time was amazing again, and less scary as I knew what to expect. The second time round I did it backwards, and I didn’t stop to have a photo, it was just a straight drop down.

I ended up buying the DVD photo and t-shirt pack afterwards which was about $60. So quite an expensive end to my first trip to New Zealand, but worth it.

I addressed by adrenaline come down with a coffee hit in the nearby Starbucks with my mum. Amazing day.

I’d really recommend this if you are in Auckland and not on a budget.