I’ve not long returned from a trip up to Auckland.

My flight left Christchurch just after 7pm on 23/02/12 … which is one year to the day that I flew from Sydney to Auckland. I had no idea that one year later I would be living and working in Christchurch. 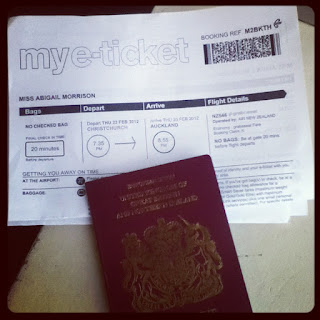 I think I mentioned in an earlier post, but domestic air travel here is SO easy! You don’t need a passport, or you don’t need to faff about with having liquids in clear plastic bags and under 100ml. You rock up at the airport about 30 mins before the flight, wander through security, which wasn’t queued much, scan you’re e-ticket (see above) and walk onto the plane. It was as easy as getting a bus!

The plane I was on was an all black themed plane (painted blacked, which said “crazy about rugby” on the side). The plane itself was lovely .. black leather seats. You got free drinks/snacks! Loved it. The ticket itself cost the same as the cheaper airline jetstar, so I was well impressed.

On the way up to Auckland, I sat beside this guy, who was I think half stoned. He had travelled up from Queenstown to Christchurch on a bus, drinking all the way. He chatted most of the way, a proper wee hippie. He informed me that on the way from QT to CHCH they stopped off at Tekapo, and it was roasting hot, so they went skinny dipping (nice!). He also liked to use the word ‘choice’, I guess in replacement for the word ‘sweet’

He asked where I was from and how long I was in NZ for etc, and everytime I answered, I got the repsonse “choice” very odd indeed!

During the flight we had, what I though would be a usual flight safety video played. It was far from this. It was the most hilarious thing I’ve seen:

I literally sat there going “is this for real?!” It was, but a totally great way of getting people to pay attention to the safety video.

Arriving in Auckland, the weather had turned a little rubbish, quite wet, but warm (humid!).

Seeing my family again was great, but I’ve forgotten how tiring the kids can be. I got up to take them to school. I must have got out of the bathroom around 7am, and my two cousins stood there, bright eyed going “good morning abbi!” and I thought, “is it, at 7am?!”

In saying that though, it was nice to be involved in the school run, breakfast time etc again.

On Friday morning, my latest and greatest brightest idea was a bungy jump from Auckland harbour bridge. I’ve seen a lot of videos of people doing it, and a few people I know have done the Nevis bungy in Queenstown, which is 135m drop from a cable car. I want to do it, or think I may do.

Doing the bungy, I thought it would be easier than the 16,000ft skydive, or the 192m controlled base jump from the skytower I did last year. Not so!

After getting up there, and doing my little pengiun shuffle to the platform edge, I totally freaked out. It doesn’t look that hard in other videos, and all the other guys that jumped before me, made it look so easy!

I had to be talked round into doing it. I stood there going “crap … its so high, I can’t do it, I can’t do it” and the guy was so good saying “ok … now you didn’t come up all this way, and pay money to come and look at the water, and scare yourself.” It took me at least 2 minutes before I jumnped off! Probably on the fiftth attempt.

Some photos, for your amusement: 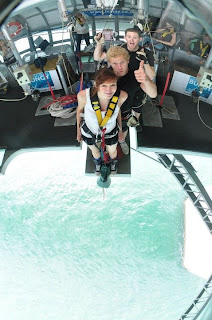 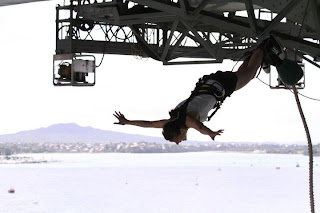 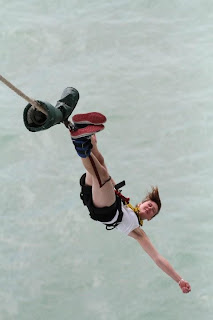 After I did it, it was great …. it was just the initial jump and having the faith that the rope would catch me! The freefall was short than a skydive, but much scarier! I really do want to do the Nevis, but I may need considerable courage (and a strong drink) to do it!

In the evening, I went to Eden park to watch the rugby Canterbury Crusaders vs Auckland Blues. Amazing to be back at the stadium. I had a tour there in March last year, and I remember standing at the top of the north stand thinking “I’d love to be back here for a match” and here I was. Awesome. We won, narrowly. We being Canterbury. I am now the proud owner of a crusaders season ticket (supporting the locals!).

The rest of my time in Auckland was spent with my family, going to music lessons, horse riding lessons and generally catching up. In the evening I spent time myself in the city. I do like city life generally, but in a way I am glad I did not choose to live in Auckland.

Walking around the city, it gave me a glimpse into what a city centre is like again. As Christchurch is New Zealand’s second largest city (or was, pre earthquake!) I wondered if Christchurch felt like what Auckland did on Saturday night, busy, loud, full of tourists, students and backpackers.

However, in saying all of that, I don’t think that having a city centre in the red zone takes away from Christchurch, maybe as I didn’t know it before it hasn’t affected me, but as I daid before I am glad I came here. Christchurch is a funky new city, creating its own idenity! 🙂 It will more than likely take more than the year that I am here to rebuild it back to what it was, but it still does have so much to offer. 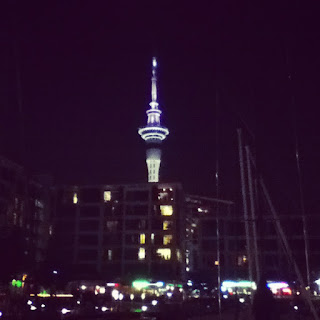 I really love this building and the harbour. Particularly pretty at night!
As I mentioned before, I love air travel I think it may have come from being totally over excited by planes as a young thing! Other awesome things from this weekend: 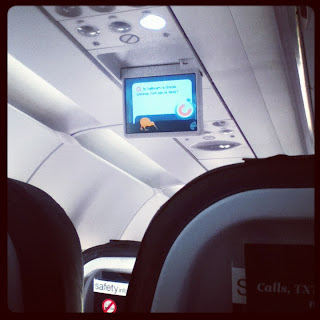 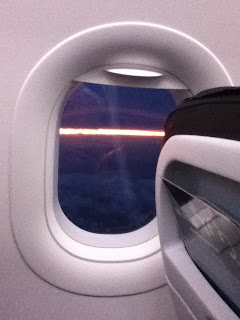 The picture above is of the most amazing sunset … I wanted to get a better picture of it, but I was at the end (aisle) seat! The picture above that is of the quiz they play during the flight. Air New Zealand is such an amazing airline.
I think I may need to have an album on Facebook of all my pictures that I take on planes or airports. I have loads from the plane window.

No little trips planned for a wee while yet. Hokitika in the West coast in 2 weeks time for the Wild Food Fest. I may just be sick, eating bugs for fun!